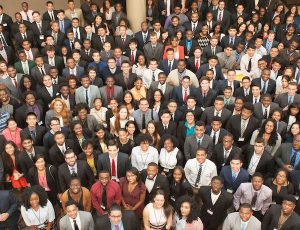 ST. LOUIS, MO, June 8, 18 — INROADS, Inc. was an early adopter of CEO Action for Diversity & InclusionTM, led by a steering committee of CEOs and leaders, with Tim Ryan, Chairman and CEO of PricewaterhouseCoopers (PwC), as chair of the steering committee. This challenge, now with over 400+ CEOs from across the country, became the largest CEO-driven business commitment to advance diversity and inclusion in the workplace.

CEO Action for Diversity & Inclusion will be celebrating its one-year anniversary this month. INROADS President and CEO, Forest T. Harper, Jr., took note of the nonprofit’s personal impact of preparing 21st century diverse leaders for corporate success. “We believe in leading by example. Our commitment to move the diversity needle started in 1970 with the founding of INROADS, and this pledge was another avenue for us to fulfill our mission in Corporate America. As a result of our daily pursuit, we can strongly state our impact to CEO Action for Diversity & Inclusion with a sense of great accomplishment.”

To date, INROADS was steadfast in accomplishing three very large pledges that have helped continue the organization’s forward movement to diversify the workplace: continue to cultivate a workplace that supports open dialogue about diversity and inclusion, implement and expand unconscious bias education, and share best practices.

INROADS delivered on its commitment to cultivate open dialogue in the workplace by training more than 400 graduating college seniors on unconscious bias before they entered the workforce. By hosting its annual Leadership Development Institute (LDI), INROADS introduced students to methods for recognizing and addressing unconscious bias in the workplace — a training led by Dr. Vanessa Weaver, founder and CEO of Alignment Strategies (ALS), one of the country’s premiere organizations and among the first to focus on diversity as a business driver. The three-day LDI training occurred July 2017 and culminated over a series of events focused on leadership development for diverse leaders.

INROADS extended its unconscious bias education to its staff. By creating best practices for recognizing and addressing unconscious bias in the workplace, INROADS has trained 100% of its internal staff to ensure that their corporate culture continues to be a model for accommodating and promoting diversity and inclusion. The training was in partnership with Diversity and Inclusion Television (DITV).

In addition, INROADS will take its commitment to the next level by introducing its second training of unconscious bias to hundreds of graduating seniors at its upcoming Leadership Development Institute July 19-21, hosted by Proctor and Gamble and presented by FedEx.

For more information about INROADS, its programs and how you can become connected to the nonprofit, visit INROADS.org.

Founded in 1970, INROADS develops and places talented underserved youth in business and industry, preparing them for corporate and community leadership that affects community renewal and social change and elevates economic status and quality of life. INROADS has placed students in over 135,000 paid internships throughout its history, and graduated over 28,000 alumni into full-time professional and leadership positions with over 1,000 corporate partners. Currently, INROADS serves nearly 1,300 interns and 200 corporate clients. Learn more at INROADS.org and connect with us on Facebook, Twitter, Instagram and LinkedIn: @INROADSInc.