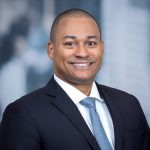 Sekou Kaalund is a Managing Director at JPMorgan Chase & Co. and head of the Northeast Division for the Consumer Bank. In this role, Kaalund oversees 1000 branches in the Northeast, covering five regions with over 10,000 employees and over $300 billion in deposits and investments. Kaalund is responsible for establishing goals and frameworks for the banking teams and executing transformative initiatives and strategies to drive growth and enhance the client experience.

Prior this role, Kaalund was the Head of Advancing Black Pathways, a JPMorgan Chase program created to help Black individuals, families and businesses achieve sustained economic success. Kaalund also served 11 years in numerous leadership positions within J.P. Morgan’s Corporate and Investment Bank —including as Head of U.S. Pension Fund Coverage and as a senior relationship manager for some of the firm’s largest clients. He joined J.P. Morgan in 2007 as Managing Director and Global Head of Sales for Private Equity and Real Estate Fund Services. Kaalund previously held leadership roles at Citi and served as a Commission Bank Examiner at the Federal Reserve Bank of New York.

Kaalund currently serves on the board of INROADS,  The Public Policy & International Affairs Program, and is a Cabinet Member of Black Entrepreneurs NYC (NYC Department of Small Business Services initiative). He has previously served as a trustee for Duke University’s School of Public Policy, New York City Parks Foundation, and the Council of Urban Professionals. His civic contribution and corporate success have been recognized in several organizations – including in Ebony Magazine’s 2020 Power 100 list for the “Titans of Industry” category and Face2Face Africa’s 2019 “30 Black Stars List.” Kaalund has been featured in numerous publications for his work, including BBC, Forbes, NBC, CNBC, Black Enterprise, Essence, and more.

Kaalund earned a Master’s of Public Policy from Duke University and Bachelor’s from Hampden-Sydney College.