The program will deliver leadership and STEM development to Oakland high school students. 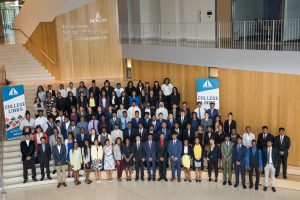 OAKLAND (December 15, 2020) — JPMorgan Chase is supporting INROADS’ expansion of the College Links program to Oakland in an effort to help Bay Area youth from communities of color prepare for college and get on a pathway to STEM-related careers.

For nearly a decade, JPMorgan Chase has partnered with INROADS and has contributed to the organization’s ability to deliver leadership and career solutions for talented and underrepresented students.

“Now, more than ever, it is critical that we wrap our arms around our underrepresented youth,” said Forest T. Harper Jr., president and CEO of INROADS. “This support from JPMorgan Chase will allow us to serve hundreds more youth across the country and position them for both success at the university level and in the corporate world.”

In addition to JPMorgan Chase, the expansion of College Links to Oakland is being supported by INROADS’ Community of Action — a special group of partners that’s committed to maximizing the impact in Oakland. This group includes the Arik Armstead Academic Foundation, Jack and Jill of America, Inc., 100 Black Men of America, and National Society of Black Engineers.

Founded in 1970, INROADS has earned a reputation for providing sustainable corporate solutions for underserved and talented youth. Their programs have propelled the careers of Black corporate leaders and influential start-up founders.

INROADS was founded more than 50 years ago. Inspired by the famed I Have a Dream speech, Frank Carr founded INROADS to remove career barriers to corporate opportunities for people of color. Today, INROADS is credited with establishing the Black middle class. With more than 40,000 alumni, INROADS is the largest nonprofit organization committed to leadership and career development for underserved and underrepresented talent in the world.

INROADS has placed students in more than 154,000 paid internships throughout its history, and graduated more than 40,000 alumni into full-time professional and leadership positions with more than 1,000 corporate partners. Currently, INROADS serves 800-1,300 interns and 200 corporate clients. Learn more at INROADS.org and connect with us on Facebook, Twitter, Instagram and LinkedIn: @INROADSInc.